This review is part of Forgotten Film‘s 1984 blogathon. This blogathon is nice and simple, over 100 bloggers shall be covering films that were released in the year 1984. You can find out more details as well as the list of films covered here: http://forgottenfilmcast.wordpress.com/2014/06/05/announcement-1984-a-thon/ 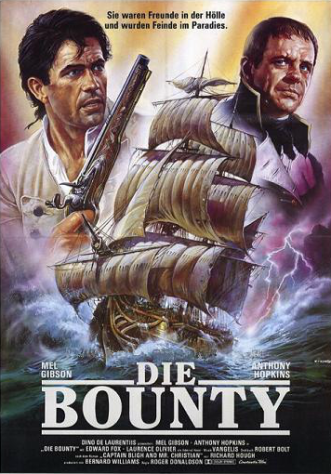 With its excellent performances and engaging moral dilemmas The Bounty is well worth your time.

This film has a fantastic cast with members that include Anthony Hopkins, Mel Gibson, Daniel Day Lewis, Bernard Hill, Laurence Olivier and Liam Neeson. Then again, this tale of mutiny at sea has always attracted strong actors such as Marlon Brando, Richard Harris, Clark Gable and Trevor Howard in previous versions of the story. What’s interesting here is that, unlike in earlier films where Lieutenant Bligh is portrayed as a monster, Hopkins here provides us with a man who is complex, but more importantly who is relatable.

For those who don’t know, the film follows the story of  a crew who set sail for the idyllic island of Tahiti. On their journey to paradise tensions rise between the crew and the increasingly harsh Lieutenant Bligh, a conflict which ultimately results in a mutiny. I’ll save the details of how the events all play out, after all I like to preserve spoilers on this site, but I will say that here we are not faced with a simple discussion of freedom versus dangerous authority but a far richer display of competing ideas of duty, life, what it means to be human and what ultimately is worth sacrificing one’s life for.

The film’s greatest strength is undoubtedly Hopkins’ performance. In this blogathon which examines the year 1984, I will put forward the argument that his is one of the strongest and most exhilarating of those which the year produced. His character is undoubtedly flawed but, as easy as it is to get caught up in the marauders’ hatred of him, if you look closely you can see more kindness and loyalty in Bligh than in any other character. He does not overshadow his other cast members however; Gibson’s take on Fletcher Christian is a very quiet, meditative one. Some have criticised it as being vapid, but I think it is an intelligent take on the character which allows him to display a great range of skills when Fletcher is both forced into desperate action and in the more passionate moments his character finds. His silence also invites us in to think about how we would deal with the situation. We find ourselves working through the deliberations he deals with and ultimately opens the film up for us to ethically engage with its moral dilemmas.

For a film which does so much right it is a great shame that I have to list two prominent flaws. The first being the film’s pacing. It could have used a little tightening up in the middle. Although a few scenes do drag a little, it doesn’t ruin the film by any means. It just has to fight for your interest a little more than it should at times. The second flaw is much more troublesome, and that is its depiction of the natives the crew find. I was hoping that the crew’s dreams of finding a paradise full of sexually free and beautiful women would be met by a very different reality. With people rather than free sexual pleasures. If the natives aren’t being sexualised then they are either unintelligent or cannibalistic in nature, and that’s a great shame. Still, if you can look past that, and I could here, then you’ll find this to be a very well acted and an all round  entertaining adventure movie. The story may have been told endless times before, but this retelling justifies itself.

What is the film’s greatest strength? Anthony Hopkins’ complex and compelling performance.

Its greatest weakness? The treatment of the natives; both as simple sexual pleasures and cannibalistic savages.

Would I see it again? Yes, it’s a good adventure film with some great performances.

Fire out your thoughts in the comment box below!