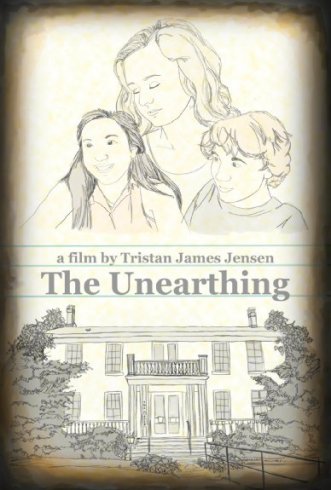 It isn’t every day that a teenage filmmaker makes contact with you and asks for a review of their new film. Tristan James Jensen was sixteen years old when he made The Unearthing and I give him a huge amount of credit for actually doing what so many merely talk about (myself included) and setting out to make a film. In the interest of fairness I am going to review this coming of age/horror without making concessions due to the director’s age but instead treat this like any other film and let the film’s qualities and flaws speak for themselves. And there are plenty of qualities on display here; the sound quality is good, the film looks professionally coloured and the story prioritises character development over jump-scares.

The Unearthing tells the story of three children who over the course of a summer find friendship together when they most need it. Not only do they need each other to combat their loneliness and struggles but also because they have spotted a ghost and need to understand what they saw and what it wants. The film’s script is a mixed bag. As I said it prioritises character development over all else which is a real strength of the film. Occasionally it veers too strongly into areas of heightened drama which it hasn’t earnt, but nothing here feels like it is intended to be gratuitous and exists only to serve the characters and their journey. The script’s other issue is that it doesn’t quite pace itself correctly. Much of the film works well and doesn’t dwell unnecessarily long on scenes nor does it cut them too short but when the film attempts to set up its climax the whole pace begins to speed up and before you even know what has happened we are into the aftermath and its catharsis. Considering the film comes in at a very economical sixty minutes I think I would have pushed Tristan to devote a little more time to letting the climax develop at its own pace and not cut it too brutally.

The acting here is varied with Angelina Masciopinto being the standout of the trio. She seems the most naturally at ease with the script’s dialogue and the eye of the camera but even she does occasionally slip into too mannered performances, a problem which affects all three cast members at some point or other in the film. However having said that all three are likeable and bring a level of humanity to the characters which, in the hands of other young and inexperienced actors, would no doubt have been lost. The script’s dialogue is often natural enough sounding to enhance their performances rather than detract from them, although it too does have moments which could have been refined and improved upon.

The Unearthing is a coming of age drama which feels pretty innocent and childlike on its surface but which contains a darker and more adult depth to it when it starts to get going. Not everything works here in practice, but the film’s intentions are strong and the directions it strikes out in demonstrate on its directors part a willingness to create films that are both human and thrilling. This film isn’t there yet, but its certainly a good step in the right direction.

What is the film’s greatest strength? The scripts focus on its characters.

Its greatest weakness? Many irregularities in the script need to be ironed out.

Would I see it again? Probably not, but I will be interested in seeing more of Tristan James Jensen’s work in the future.

Thanks for reading, please do fire your thoughts out in the comment box below!