The Measure of a Man – New Release Review 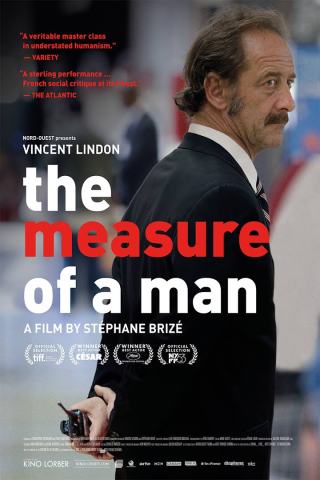 The Measure of a Man (La loi du marché) could turn out to be a measure of one’s patience if they’re not prepared for the meditation that lays ahead. But if you’re willing to stick with it, you’ll hardly miss Stéphane Brizé’s biting critique of the status quo of the working class French, casting Vincent Lindon’s family man into the fire as he scrambles for another way to make ends meet after losing his factory job in unceremonious fashion.

I can hardly say I know what it’s like to live in Europe, but it’s not a stretch to imagine that the cutthroat experience of seeking better work in America doesn’t just end wherever there are geopolitical borders. It’s not the continental shelf; people the world over face variants of the same basic problems that constitute surviving in a modern society. And Thierry Taugourdaeu (Lindon) is one of them.

We first meet him when he’s become utterly fed up with the wild goose chases that are the job training courses he’s spent at least the last year committing to. Now he’s being told yet again, upon completion of another course, that he won’t get a job doing what he has just been trained for. Lindon is very good in the role, his face remaining mostly unchanged during the hardships, even while it’s clearly obvious that despair and exasperation are well setting in even by the opening frame. Wisely he never overacts or overreacts to new developments. His measured performance (e-hem) feels totally human.

His love for his family — wife Karine (Karine de Mirbeck) and their developmentally challenged high-school aged son named Matthieu (Matthieu Schaller) — is without question. As he faces a series of humiliations and disappointments his trials become a testament to that love. He worries, he doubts and occasionally he becomes discouraged. He doesn’t interview well, as his peers point out at will. He and his wife take dance classes, presumably to take their minds off of the fact they’re going to have to sell off assets in order to send their son to college.

The lack of consistently compelling viewing separates it by quite a large margin from its 2015 cousin Two Days, One Night, in which Marion Cotillard starred as a woman fighting for her right to regain employment with the same company after suffering a mental breakdown. The Dardenne brothers were arguably afforded a better product on the back of career-best work from Cotillard alone, though her character had to interact with a number of significant supports in order for us to gauge her psychological state — that intimate connectivity is the film’s backbone. Thierry has a much different role to play; he’s much more of a loner, which proves to be a roadblock to success for him at points.

The Measure of a Man has neither the high(-ish) stakes nor the fiercely emotional performance that will make it linger in the way Two Days, One Night still does. Brizé nevertheless has created a very watchable film here and yes, a damning one to some lesser degree. Exasperation is an inescapable commodity here, and you can feel the weight of it accumulating as days turn to weeks, weeks to months. The study goes further than simply telling one man’s journey: it’s microcosmic of the situation many people of the global working class find themselves in today.

The Measure of a Man open as of the 3rd in UK cinemas, will you be checking it out? Let us know in the comment box below!

Tags: film, review, Stéphane Brizé, The Measure of a Man