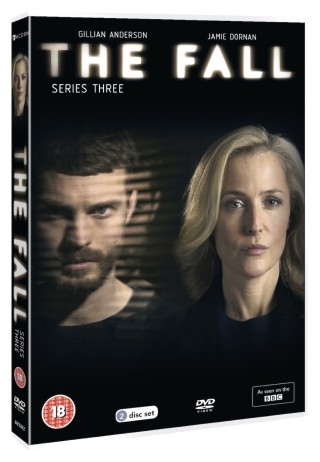 It’s your chance to win your own copy of the thrilling third series!

We here at Rumsey’s are excited to announce that Series 3 of The Fall will be arriving on DVD and Blu-Ray in the UK on the 31st October!

‘The Fall is a groundbreaking drama that had a nation gripped over two series as we followed the lives of two hunters – a serial killer stalking his victims and a high-powered detective superintendent on his trail. The first series was BBC Two’s most watched drama in 2013 and Series two gained a series average of 3.3 million viewers, making it one of BBC Two’s highest-performing dramas of 2014.

Picking up at the moment where the heart-stopping series two finale left off, Spector, critically injured in a devastating ambush, lay bleeding in the arms of Detective Superintendent Stella Gibson. Moments before, the intense and single-minded investigator thought she had her man; now, shocked and desperate, she’s losing him.

Bringing a killer to book is going to take much more now than simply catching him. In the emotionally charged aftermath of the shooting, Gibson’s personal journey to exact justice for the victims’ families must begin with the blood-soaked fight to keep Spector alive.

As The Fall reaches its inexorable conclusion, it’s clear that the rules of this deadly game of cat and mouse are set to change once again.’

We here at Rumsey’s have decided to team up with Acorn and the BBC in order to promote the release and they have been good enough to grant us a DVD to give away to one lucky Rumsey reader! To enter all you have to do is answer the simple question below by 31st of October.

Question:
Jamie Dornan takes centre stage as Spector, but what other famous character is he well known for playing? Is it:

Remember the give-away closes on the 31st of October.

← Stretch and Bobbito: Radio that Changed Lives
A Brief Encounter with Denise Moreno →