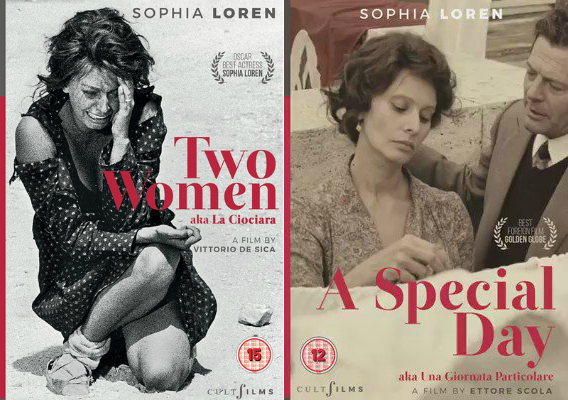 It’s your last chance to win yourself these restored classics!

We here at Rumsey’s are very excited to announce that the new independent label Cult Films will be making their mark on the world by presenting us all with these two classic films, which for the first time will be in HD! They will be released on DVD and Blu-ray on the 31 October 2016!

Set in Rome on the day of Hitler’s momentous 1938 state visit to Mussolini, while the rest of the residents are at the parade, housewife Antonietta (Loren) reluctantly stays at home to do chores, only to find her mysterious gay neighbour Gabriele (Mastroianni) has also chosen to abstain from the political propaganda rally. Or was he told to stay away? Their chance meeting will change their perceptions of love, politics and life forever.

Painstakingly restored to its original specifications, the film will be available for the first time as an HD release from a 4K scan and will be released on DVD and Blu-ray on 31 October 2016. The unusual colour palette of A Special Day was specially conceived by Scola and the celebrated cinematographer Pasqualino de Santis (Death in Venice) is reinstated according to the director’s instruction in this CultFilms release.’

‘Two Women aka La Ciociara from celebrated director Vittorio De Sica (The Bicycle Thieves, Umberto D) is presented for the very first time on DVD and Blu-ray in pristine HD, sourced from a restored negative, on 31 October 2016. This neo-realist classic won Sophia Loren (El Cid) a Best Actress Oscar®, the first and only actor or actress to win for a foreign-language film performance.

Adapted from the eponymous novel by Alberto Moravia, Two Women tells the story of a beautiful young widow Cesira (Loren) and her twelve-year-old daughter as they struggle to survive in war ravaged Italy. In the hope that Cesira can protect her daughter from the horrors of war they leave Rome to avoid the bombings and seek refuge in rural Italy, but there’s no escaping the devastating tragedy of war.

We here at Rumsey’s have decided to team up with Cult Films in order to promote the release and they have been good enough to grant us a Blu-Ray copy of each film to give away to lucky Rumsey readers! To enter all you have to do is answer the simple question below by 31st of October.

Question:
What other highly acclaimed film did Vittorio De Sica direct? Was it:

A – Death in Venice?

Remember the give-away closes on the 31st of October.

← Exclusive Interview: Will Sharpe and Tom Kingsley Talk The Darkest Universe!
Last Chance to Win ‘The Fall: Series 3’ on DVD! →