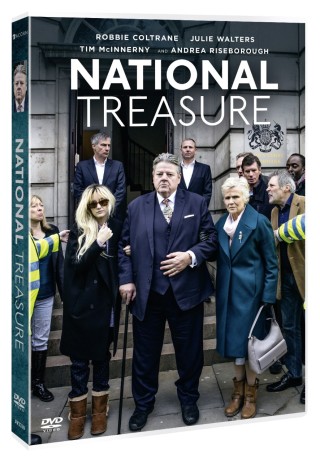 It’s your last chance to win this powerful TV drama!

We here at Rumsey’s are very excited to announce that the highly acclaimed National Treasure will be released on DVD on the 7th November 2016. We are even more excited though to be offering up a copy for one of you!

‘Screen Legends Robbie Coltrane (Cracker, Harry Potter) and Julie Walters (Indian Summers, Billy Elliot) star in National Treasure, a brand new compelling and timely drama about a beloved comedian who is arrested following the surprising allegation of sexual assault dating back to the ‘90s. Following its run on Channel 4 this controversial series will be released on DVD courtesy of RLJ Entertainment’s Acorn Label.

Written by BAFTA-winning writer Jack Thorne’s (Harry Potter and the Cursed Child, This is England) and directed by BAFTA-winning director Marc Munden (The Devil’s Whore, Utopia), this four-part thought provoking drama will arrive on DVD on 7 November 2016.

Paul Finchley (Coltrane) is one half of a much loved comedy double act – a cherished household name with a career that spans several decades. He’s a bonafide national treasure.

Then he receives a knock at his door. Faced with an accusation of historical sexual offences, the life of this adored entertainer begins to unravel.

Paul and all those closest to him are put under the intense pressure of the investigation and the merciless media circus that accompanies it, from his wife of 40 years, Marie (Walters) and his troubled daughter, Dee (Andrea Riseborough – Bloodline, Birdman), to his manager and his loyal comedy partner, Karl (Tim McInnerny – Notting Hill, 101 Dalmations).

As the investigation and criminal trial work their way towards a verdict, memories that have become muddied in the intervening four decades are dredged, doubts flourish, loyalties are tested, and truths, half-truths and lies are all exposed.

This hard-hitting exploration of truth, memory, trust and family calls us to question, how well do we really know ourselves and those closest to us?’

We here at Rumsey’s have decided to team up with Acorn in order to promote the release and they have been good enough to grant us a DVD copy of the film to give away to a lucky Rumsey reader! If you want that to be you then all you have to do is answer the simple question below by 7th November.

Question:
Which actress plays Finchley’s daughter in the series? Is it:

Remember the give-away closes on the 7th November.