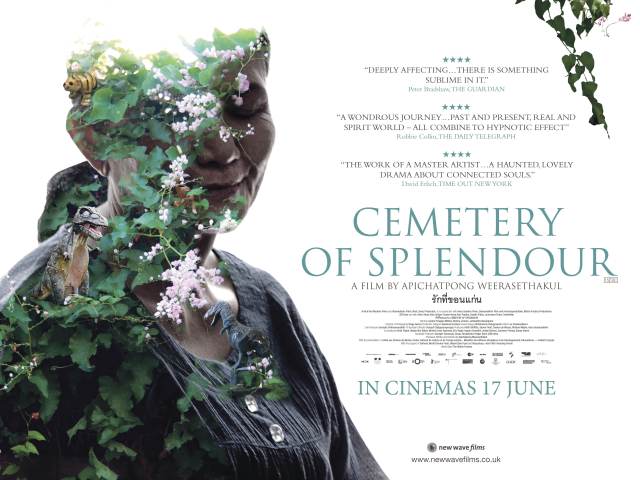 The transition from movie back to reality is rarely as jarring as when you are forcibly removed from the most recent effort of (judging by one film) cinematic poet Apichatpong Weerasethakul. Cemetery of Splendor (Rak ti Khon Kaen), the Bangkok-born filmmaker’s eighth directorial credit, plumbs the depths of the soul in a meditative and meandering narrative that simply defies categorization.

Let’s get one thing clear: if you’re searching for the literal, the low-hanging fruits of traditional storytelling — a conflict that arises that must be resolved, barriers to that attempt to overcome, resolutions that, tidily or not, seal the deal in one fell swoop — you’re probably going to hate Cemetery of Splendor. I mean hate it. On top of that, patience is absolutely key; this is a very deliberately paced production. At times it can be testing. It might be evident how radically different an experience we’re in for judging merely by the way Weerasethakul starves us for the very first image in an unusually protracted cold open — heavy machinery digging a big hole adjacent to a hospital in the Thai village of Isan — and how deliberately the vast majority of his shots remain static, filmed at a distance such that viewers must pick and choose what it is in the frame that interests them most.

This makeshift hospital is where our journey begins. We’re not traveling far and wide; rather we’re delving into the human consciousness, into the dreams of a man who has been struck with a mysterious sleeping sickness and who gains the friendship of a kindhearted volunteer named Jen (Jenjira Pongpas Widner). In this hauntingly quiet space we see several cots lined up with bodies in each one, all on the drip and seemingly lifeless. They’re soldiers but they’re not dead, nor do they seem like they’re suffering from physical ailments. Instead they’re sleeping — all day and all night. The camera eventually settles on one man all the way in the back corner, a man named Itt (Banlop Lomnoi) who has had no visitors. Jen decides she will take care of him.

This seemingly innocuous facility — a school that has been converted into a temporary clinic — has been said to possess ethereal power, having its foundations built directly upon the graves of ancient kings. The juxtaposition some believe is the very cause of the soldiers’ sickness: their strength in the real world is being manipulated by these kings who remain engaged in an eternal spiritual war. The clinic’s staff, housewives who are volunteering perhaps for no other reason than out of the goodness of their heart, have taken numerous approaches to ease their suffering. The most striking and perhaps most abstract method is their light therapy technique in which vertical tubes of neon light are placed beside each bed, the colors ever so slowly transitioning between red, green and blue. 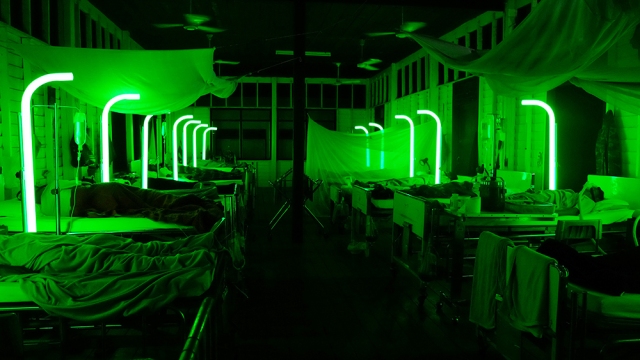 Still from Cemetery of Splendour

Theoretically each color holds some sort of cultural and/or political significance (red symbolizes national pride; green represents Thailand’s military forces and blue indicates royalty and privilege), though if anything their application in this film contributes most apparently to the physicality of the experience. As Cemetery of Splendor opens up, these colors begin bleeding into the film reel itself, affording a psychedelic quality to proceedings. Even more experimental than this technique is Weerasethakul’s bold decision to have his actors reenact the process of communicating with the spiritual world. Early on we are introduced to a young woman named Keng (Jarinpratta Rueangram), a medium who helps visitors reach out to their loved ones — those soldiers imprisoned by silence. She decides to use her extraordinary gift to help Jen interact with Itt.

In one of the film’s most ambitious sequences, Jen and Keng take a walk about the quaint village, through a wooded park that’s more like a relic of a forgotten history than some place families go to take a stroll. And so develops a scene in which words simply do not do justice; in fact to actually detail what happens here would be ultimately to spoil its essence. Suffice it to say the moment is seized brilliantly by all involved, the actors bravely trusting in their director that they won’t look silly demonstrating what could arguably be the most complicated and most abstract concept any filmmaker could imagine recreating.

Here we have our best shot of actually witnessing the spiritual and the physical world colliding, at least thematically speaking. The young soldier, vicariously through Keng’s gentle mannerisms, “reveals” to Jen — whose American husband, by the way, has been intentionally kept out of sight throughout most of the narrative to give the impression Jen’s personal life is a wee bit complicated — precisely what he’s experiencing in his sleep. It is also in this protracted scene where we find out the devastating truth behind Jen’s physical deformity. One of her legs is significantly shorter than the other, which has prompted her to get around on crutches and with a specially-fitted shoe to help her balance. Heretofore the issue has gone unaddressed, but Weerasethakul has patiently waited for the right moment to drop the bomb.

In the name of hyperbole, words will inevitably fail me when a friend asks what this movie is all about. I’m of a mind to tell them that it’s about everything. That’s simultaneously the least satisfying and the most accurate (and most concise) way of putting it. Unsatisfying in the sense that it’s hardly a descriptive response and it seems cheaply broad; accurate in that Cemetery of Splendor opens up so many doors for viewers to walk through and interpret things as they see them. This is going to be a different film to different viewers. Or I could be completely wrong and Weerasethakul actually has a much more specific, narrowed focus. I, a Westerner, might just be the guy who came before King Arthur who tried to wield Excalibur.

Cemetery of Splendor is out today on DVD & Blu-Ray, will you be checking it out? Let us know in the comment box below!