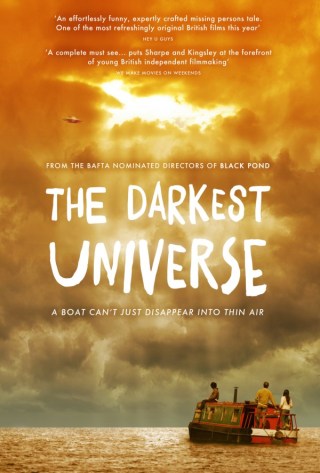 The Darkest Universe, from BAFTA-nominated Will Sharpe and Tom Kingsley, is a thoroughly original British independent release that identifies the young directors as a tandem to keep an eye on.

Not only is their second effort (their first being 2011’s Black Pond, for which they were nominated) able to pull off that oh-so-tricky juggling act of remaining relatable while reaching for profundity, The Darkest Universe also carves out a narrative that never compromises and rarely, if ever, confesses to whatever budgetary and other technical limitations it faced.

The story, co-written by Sharpe and Tiani Ghosh, tackles heavy themes such as death, loss, grief, obsession and idealism, but skirts around melodrama as it details a mysterious procession of events in which a young man named Zac Pratt (Sharpe) launches a desperate campaign to track down his sister after she goes missing along with her new boyfriend on a narrow boat on the English canals.

There’s more than a hint of Jeff Nichols’ Midnight Special here. There’s something magical about the power of suggestion in both productions and the similarities are more acute than that even; in the same way Nichols’ tiptoeing across Texas tantalized audiences with glimpses of an otherworldliness so too does The Darkest Universe, if only to a much subtler and perhaps slightly less assured degree. If there’s anything that hints toward a limited supply of resources it’s these more fantastical sequences. Nevertheless, the film’s prioritization of character over spectacle is enough to smooth over some dodgy special effects.

Two timelines build gradually toward a deeply moving finale, one that manages to somehow be both open-ended and definitive — if only in the sense that it is definitely romantic. One follows Zac in the present as he becomes frustrated with efforts on behalf of local police that he views as minimal at best; the other provides context, delineating a pained history with his wayward and often frustrating younger sister Alice (Ghosh). It’s a flashback-heavy narrative but the execution is efficient and confident. It’s also a creative way of generating suspense as we build towards the big reveal. Because a boat can’t just disappear into thin air.

In those flashbacks we come to view Zac as a high-strung, obsessive sort with a tendency to be controlling. In the present we see not only those traits manifest themselves in the way he treats Charlie (Raph Shirley), the brother of the also-missing Toby (Joe Thomas, of The Inbetweeners fame), but more disturbing symptoms of someone nearing a psychological breakdown. While we learn that perhaps the disappearing act could well be a response to her brother’s behavior, it’s difficult to still not feel badly for Zac as he slowly unravels.

The Darkest Universe is also a well acted ensemble piece. A variety of British talent is on hand to fulfill supporting roles, be they strangers incidental to the situation or relatives caught up in it. Bonafide independent productions aren’t typically known for their star-making performances. Sharpe and Knightley’s sophomore effort seems to be one of those exceptions. Ghosh and Thomas in particular are memorable as the young lovers at the center of this universe. Sharpe’s pretty brilliant as well in this intensely obsessive, racked-with-guilt performance.

The drama’s authenticity is perhaps most impressive of all. We’re consistently invested in the emotional trajectory of Zac that we never stop to question what we’re witnessing. We want to believe that things like this really can happen. Romantics no doubt want to believe it badly. The whole thing culminates in an experience that’s worth having again and again.

The Darkest Universe is out in the UK now, will you be checking it out? Let us know in the comment box below!